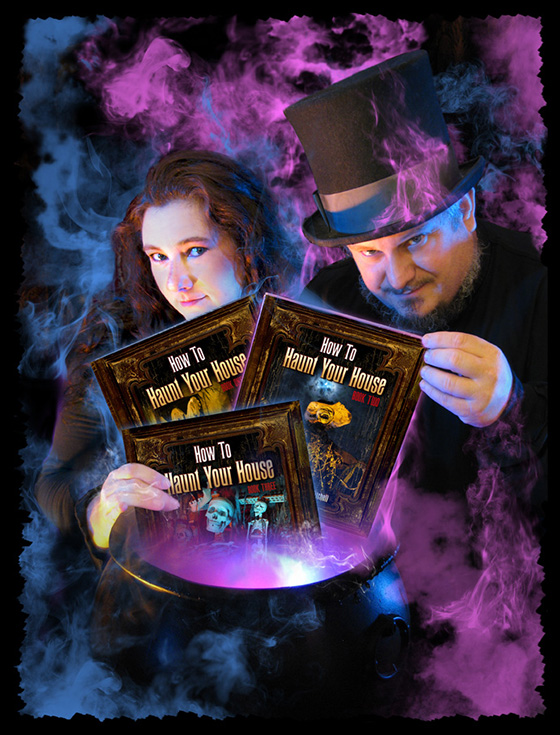 We love our fear of the unknown. We like mysterious, cold spots and things that make us jump. We smile at being caught off guard and laugh often when something makes our hair stand on end. We are at home with ghosts, and spooks, and creaky doors. It’s Halloween again—our favorite time of the year. Time to embrace our fear of the dark and things that go bump in the night!

Neighbors will start to notice odd structures going up in our backyard in early August. Strange lights are often spotted in the late, night hours, and the occasional, stray sounds of owls, hissing cats, and long, drawn-out cries of wolves will be heard echoing down the driveway. By October, a permanent think, gray fog will hover over our house as a multitude of fog machines are set into place and tested. The Jack-o-lanterns will be lit and the skeletons hung, and endless yards of cobweb will be strung from every nook and cranny. The cauldron will be filled and candy will come out. The animated, black crow will call out, “It’s time! It’s Halloween time again!”

Suspense will build as this new Hallows’ Eve approaches. There will be many to peak through our fence for a preview. We know they will tell their children that the sign has been posted by the roadside, inviting all once again to take a tour of The Mitchell Cemetery.

It is here that spirits move around fallen stones of old and rise up from mounds of fresh-dug graves of earth… visible to the sometimes frightened eyes of passerby’s. Some won’t make it past the open gate at the entrance. Others, won’t want to leave… amazed at all the glowing tombstones and ghosts that walk around to greet them. Costumed hands of the smallest visitors will hold tight to mom and dad and an even tighter grip on plastic pails full of candy. It is our greatest joy to think, that these brave souls will one day tell stories, about the house on Penton Street…

This site offers a glimpse of what once was… a memory of a Halloween’s past. We hope a chill runs up your spine, and your hair stands on end, and more than once, you will glance over your shoulder at the unknown sounds in the nights. Listen. Listen carefully for that child-like voice inside to say, “It’s Halloween time again…"

In 2014 we adopted three wonderful kids! They were ages 1, 3 & 4. They quite literally came into our lives when we were in full Halloween mode and filming for the ABC TV show. With giant spiders right outside their windows and cheesecloth spider webs covering every square foot of the yard… it’s hard to imagine what they thought of their new home, but they took to it like true home haunters from the first moment they walked through the door!

We went from two to five overnight. We went from Lynne and Shawn to Mom and Dad in a blink of an eye. Halloween now takes on a whole new potential. We have our own little monsters. We have someone to take trick-or-treating and the best reason of all to go all out on decorating!

From this point on, it is as, The Mitchell Family. In all the years from now, we will all look back and say, remember when we were on, The Great Halloween Fright Fight in 2014… That is when you guys came into our lives. That was the Halloween that started it all! Everything up till then, was just practice.

Shawn and Lynne Mitchell are the creators of The Mitchell Cemetery in Pensacola, Florida, featured on ABC’s The Great Halloween Fright Fight in 2014, HGTVs, Halloween Tricked Out in 2012 and replayed again on the Travel Channel. Past features also include the Fearnet.com 2007 series, Route 666, America’s Scariest Haunted Houses. They are the authors of the self-published series, How to Haunt Your House, books 1-4.

Shawn and Lynne are also fine art artists. Lynne paint digitally, using Corel’s Painter program and has a hand in everything from animation to website design using Adobe products. Shawn’s work is more traditional, using pen and ink for illustrations, or hand painting old-style animation cells. He has many pieces in both commercial and private collections.